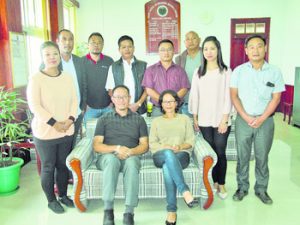 The seventh edition of the Nagaland Spelling Bee Championship, jointly organized by Fountain Club and SCERT Nagaland, will be held on September 27 and 28, at Capital Convention Centre Kohima under the theme “The Learning Edge”.Informing of this at a press conference, SCERT director T. Sekhose said the event was a co-scholastic opportunity for the students which was also a platform for them to come together in an atmosphere of friendly rivalry.Sekhose stressed on interface between the government and private schools as an important aspect of the competition and he encouraged the government school students to part take in the event.Convenor of the event, Medo Yhokha, highlighted the activities of the club and said the club had earned accolades over the years and was also trying to improve itself to take club activities further. He said that in the 7th edition, the competition will be held for the students from class 6 to 10 adding that two students from each school can participate in the event.Altogether, an amount of Rs. 1.59 lakh cash were earmarked for the different categories of prizes while an added attraction will be the Young Speller Award 2018.According to Yhokha the winner will receive a cash award of Rs. 60,000, a citation and trophy while the second, third and fourth winners will receive Rs. 40,000, Rs. 20,000 and Rs. 15,000 respectively and the four quarter finalists will receive an amount of Rs. 5000 each with citations.The young speller awardee will be awarded Rs. 4000 and a citation.The organizer has invited all the schools in the state, both government and private to participate in the competition.Organizers have asked interested parties to download forms for the contest from ‘www.fountainclub.in’ or get them from DIET centres in respective districts or from government and private school associations.