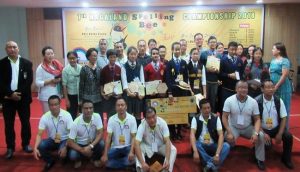 Winners of the Nagaland Spelling Bee Championship 2018 with Menukhol John, officials of SCERT and Fountain Club at the closing function at Kohima on Friday evening. (EM Image)

Kohima, Sep. 28 (EMN): In an intense nail biting competition, Kasunga Victoria Kuba of Model Higher Secondary School, Kohima, was declared champion of Nagaland Spelling Bee 2018 on Friday evening by nailing the words “Kaleidoscope” and “Sine Qua Non” correct consecutively.The word ‘Kaleidoscope’ with its origin from Greek means ‘a toy consisting of a tube containing mirrors and pieces of colored glass or paper, whose reflections produce changing patterns when the tube is rotated’ and ‘Sine Qua Non’ with Latin origin means ‘an indispensable and or essential action, condition or ingredient’.Kuba emerged the top speller beating 59 contestants at the 7th edition of the Nagaland   Bee Championship 2018 and walked away richer with a cash prize of INR 60,000, citation and trophy, organised by Fountain Club and State Council of Education Research and Training (SCERT).This is the fourth consecutive year that Model Higher Secondary School, Kohima, has won the Spelling Bee Championship since 2015-2018.Vijayanan V Thomas from St. Mary Cathedral Higher Secondary School, Kohima, by spelling the word “Valetudarian” meaning ‘a person who is unduly anxious about their health’ was declared as second, Kethono Thorie from Trinity School, Kohima, as third and Dzüveno Keyho from Great Commission Kids Academy, Dimapur, as fourth.They were awarded with cash prizes of INR 40,000, INR 20,000 and INR 15,000 with citations, while INR 5000 were given to all the quarter finalists. Kevivor Joshua Meru from G Rio School, Kohima, was awarded with the ‘Young Speller Award’ winning cash prize of INR 4000, citation and a trophy.Principal secretary of school education, Menukhol John, as the Bee special invitee of the closing function was full of praise on how the competition was conducted and maintained that the competition should be organised in a bigger way in the coming years.Encouraging the participants, John said though all may not win the prize, their participation has given them an extra edge over their friends, which he pointed out is one step towards leading a successful life.Some words like ‘Parsimonious,’ ‘Boustrophedon,’ ‘Nonfeasance,’ ‘Muniments,’ ‘Netiquette,’ ‘Habeas Corpus,’ ‘Sanctimonious,’ ‘Antedeluvian,’ ‘Quadrapartite’ etc could not be spelled out by the spellers.It may be mentioned that in the 7th edition of the Nagaland Spelling Bee Championship 2018, a total of 60 spellers registered for participation with 53 from private schools and seven from government schools from across the state. The competition witnessed girls participation outnumbering boys with 41 is to 19.