[Times of India ]KOHIMA: The 3rd edition of the Nagaland Spelling Bee Championship is slated to be held on September 25 and 26 at the Capital Convention Centre, Kohima. The annual event is being organized jointly by Fountain Club, Kohima, and the State Council of Educational Research and Training (SCERT), Organizing committee convener Neizokhotuo Belho told the media that students studying between Class VIII and XII in Nagaland were eligible to take part in the championship. The competition will have two stages —the preliminary and final stage. At the preliminary stage, each participant will be given 10 words and a time limit of one minute to spell each word. In the final stage, participants will be given five words and have to spell each word within 90 seconds. The Oxford International Dictionary will be used as the official dictionary of the competition. The club also said that it would bear the accommodation and food expenses of every participant. Only two participants from each recognized institution within Nagaland duly endorsed by their respective institutional authority can participate in the competition. The prizes for the championship are Rs 60,000 for the champion, Rs 40,000 for the second position, Rs 20,000 for third position, Rs 15,000 for the fourth place and Rs 5,000 each for quarter finalists along with citation and trophies. The 2013 edition of the competition saw participation from 76 schools in Nagaland and the club hoped to help the students participate at the national level in future. With the theme ‘Towards Consciousness’, Fountain Club, a non-profit organization was founded by a group of youth and student activists, with an aim to promote and encourage young people in academic and eco-social activities. One of its achievements has been the formation of the Nagaland Spelling Bee Competition in partnership with the State Council for Educational Research and Training. 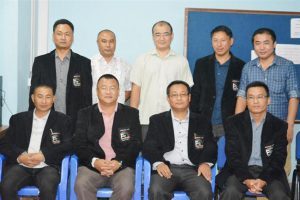 Kohima: Sept 4 2014: Hectic preparations for the third Nagaland Spelling Bee Championship 2014 are on as the championship was slated to be held on September 25 and 26 at Capital Convention Centre Kohima. Briefing media persons at Kohima Wednesday afternoon, organizers of the Spelling Bee competition, Fountain Club (FC) comprising of 16 former student leaders informed that they club received overwhelming response from the parents and teachers during the first and second championship held the last two years. They said it was even more encouraging for the club see the initiative of the teachers in organizing the competition. The championship is organized in partnership with State Council of education Research (SCERT) Nagaland. For 2014 championship, the organizers made certain tasks easier for the students as students can download the forms from the official website of the club www.fountainclub.in or from its official media partner morungexpress.com and can submit their form at fountainclubkma@gmail.com. Convener FC Neizokhoto Belho informed that the students can also avail the forms in all the SCERT (DIET) centres in the state: Mokokchung, Kohima, the graffiti Peren, CYN store Longleng and SK enterprise Kiphiri. The convener also disclosed that maintaining its standard, only two students from one educational institution from class 8-12 will be eligible to take part in the competition. The last date of the form submission was scheduled on September 15. Cash prize for the winners was also enhanced from Rs. 50,000 to 60,000 for the champion, Rs. 40,000, Rs. 20,000, 15,000 for second, third and fourth place respectively and Rs. 5000 for quarter finalist along with citation and trophies. Further, the organizers informed the educational institutions to bear the expenses of their respective participants, while the participants were expected to be in full school uniforms. Arrival, registration and briefing of the competition will take place on September 24 while luminary round of the competition be held and on 25 September and final round on September 26. The organizers will oversee all aspects of organizing the championship successfully and any disputes or issues related thus, the decision of the organizers will be final and binding.